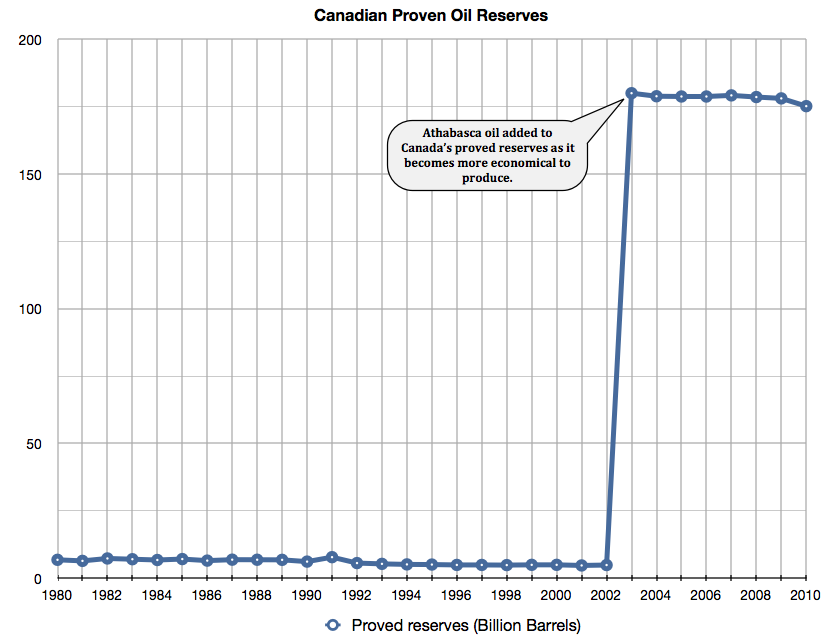 Higher values for extracted resources—particularly when Canada is second only to Saudi Arabia [excluding Venezuela undeveloped oil sands]  in oil reserves— should be good news for Canada but history has shown us that is not always the case. There are certain economic hazards that need to be recognized and addressed to avoid a Canadian structural recession. 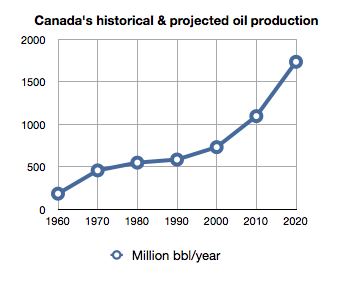 The value of the Canadian dollar exchange rate rise and falls.  85% of the influence comes from price of oil in excess of the cost of production.

Click on the map to see a full page view.

This next graph below shows the history of the West Texas Intermediate (WTI) yearly average price of oil (also known as Texas light sweet). It is a market price of crude oil used as a benchmark in oil pricing…

This map was generated this map using this web app

With election debate on the economy currently prevalent in Canada this might be a good time to ask if the Canadian Government has been on the right track. But first we must determine what internal and external changes have recently taken place that could affect our decisions for the future economic—and therefore social—wellbeing of our country.

If Canada does have problems in the near future it might be because we did not fully appreciate the world economic situation (like we were blissfully unaware about the looming subprime crisis in 2007 that triggered the resent world economic crisis).

These are the conditions that I think would cause the sudden an adverse effect if the the world price was too suddenly drop back to the more stable $30 a barrel range.

What party policies should we be looking for to deal with the problems caused by increased rents?

Wikipedia has the following explanation for Dutch disease(italic is used for emphasis): Page link here…

“The term was coined in 1977 by The Economist to describe the decline of the manufacturing sector in the Netherlands after the discovery of a large natural gas field in 1959.

In economics, the Dutch disease is a concept that purportedly explains the apparent relationship between the increase in exploitation of natural resources and a decline in the manufacturing sector.

The claimed mechanism is that an increase in revenues from natural resources (or inflows of foreign aid) will make a given nation’s currency stronger compared to that of other nations (manifest in an exchange rate), resulting in the nation’s other exports becoming more expensive for other countries to buy, making the manufacturing sector less competitive.

While it most often refers to natural resource discovery, it can also refer to “any development that results in a large inflow of foreign currency, including a sharp surge in natural resource prices, foreign assistance, and foreign direct investment.” (The latter is also interesting as it pertains to Canada and foreign investment exacerbating the future economic problem)

This economic phenomenon is not new and Wikipedia continues to explain the Dutch disease model—again italic formatting has been added for emphasis.

“The classic economic model describing Dutch Disease was developed by the economists W. Max Corden and J. Peter Neary in 1982.”

The booming sector is usually the extraction of oil or natural gas, but can also be the mining of gold, copper, diamonds or bauxite, or the production of crops, such as coffee or cocoa.

The lagging sector generally refers to manufacturing, but can also refer to agriculture.”

A resource boom will affect this economy in two ways.

In the “resource movement effect”,

the resource boom will increase the demand for labor, which will cause production to shift toward the booming sector, away from the lagging sector.

This shift in labor from the lagging sector to the booming sector is called direct-deindustrialization.

However, this effect can be negligible, since the hydrocarbon and mineral sectors generally employ few people.

The “spending effect” occurs as a result of the extra revenue brought in by the resource boom.

It increases the demand for labor in the non-traded good sector (this includes services), shifting labor away from the lagging sector.

This shift from the lagging sector to the non-tradable sector is called indirect-deindustrialization.

As a result of the increased demand for non-traded goods, the price of these goods will increase. However, prices in the traded good sector are set internationally, so they cannot change.

This is an increase of the real exchange rate.

In reality, however, the shift away from manufacturing can be detrimental.

If the natural resources begin to run out or if there is a downturn in prices, competitive manufacturing industries do not return as quickly or as easily as they left.

This is because technological growth is smaller in the booming sector and the non-tradable sector than the non-booming tradable sector.

Since there has been less technological growth in the economy relative to other countries, its comparative advantage in non-booming tradable goods will have shrunk, thus leading firms not to invest in the tradables sector.

Also, volatility in the price of natural resources, and thus the real exchange rate, may prevent more investment from firms, since firms will not invest if they are not sure what the future economic conditions will be.”